10 Pieces of Stoner Art We Love

What does stoner art mean to you? It can take many forms: a psychedelic painting, an outside-the-box take on an existing piece, a hilarious stoner meme, or a perfectly rolled joint. Every now and then we like to pull out a few pieces, give a little review, and share them with our followers. Here are 10 of the coolest pieces of stoner art we’ve come across recently.

Baked in the Bath 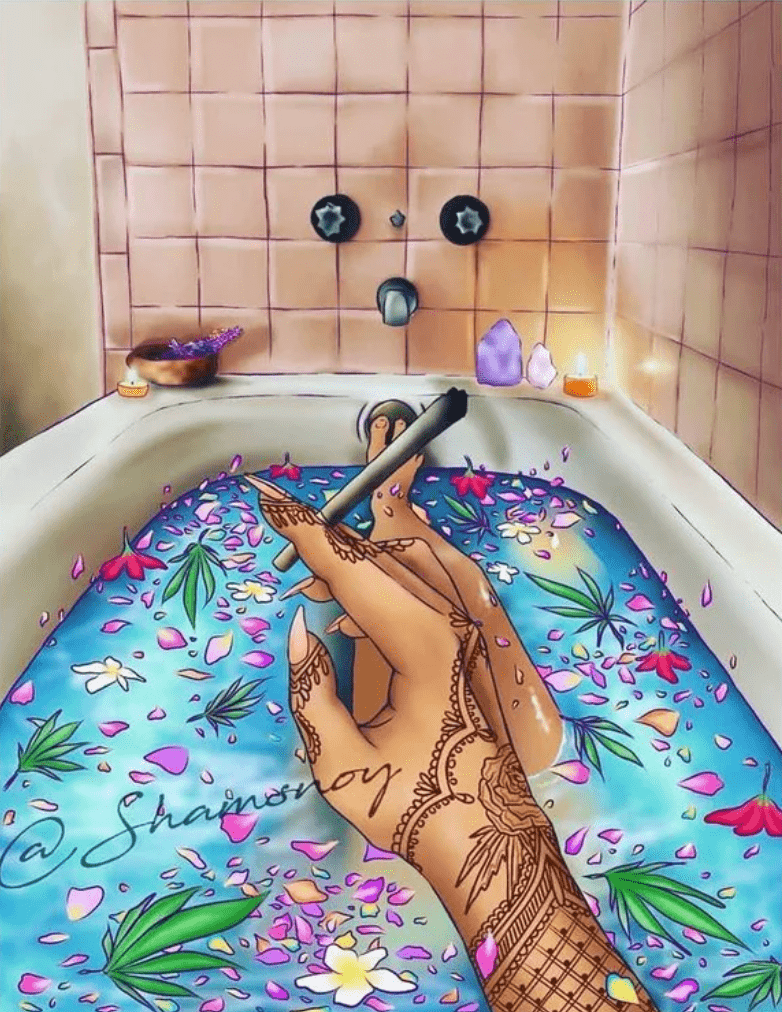 This first psychedelic beauty comes from Reddit. What stoner doesn’t get a little jealous looking at this scene? That said, it looks like a lot of effort. I feel like I would definitely get that blunt wet. 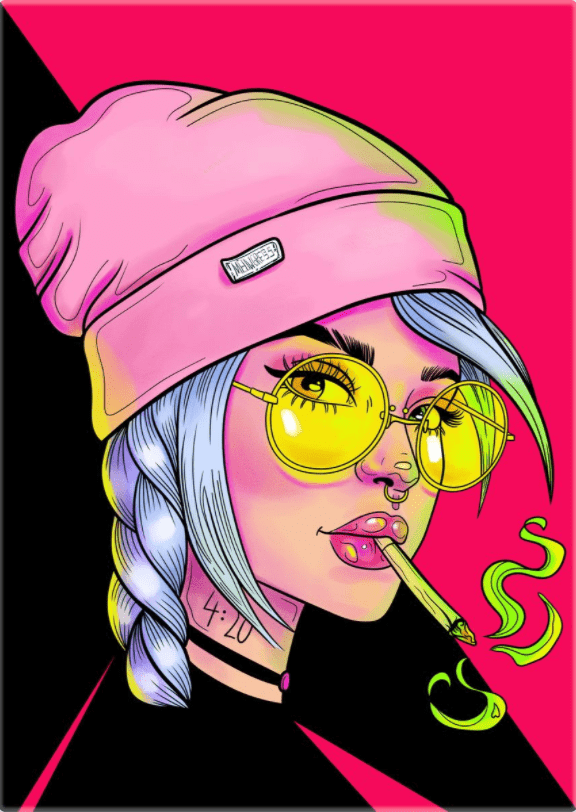 The stoner chick in all her glory. The 4:20 tattoo is a little on-the-nose for my taste, but the colours and character really bring this together. She’s cool, she smokes up. 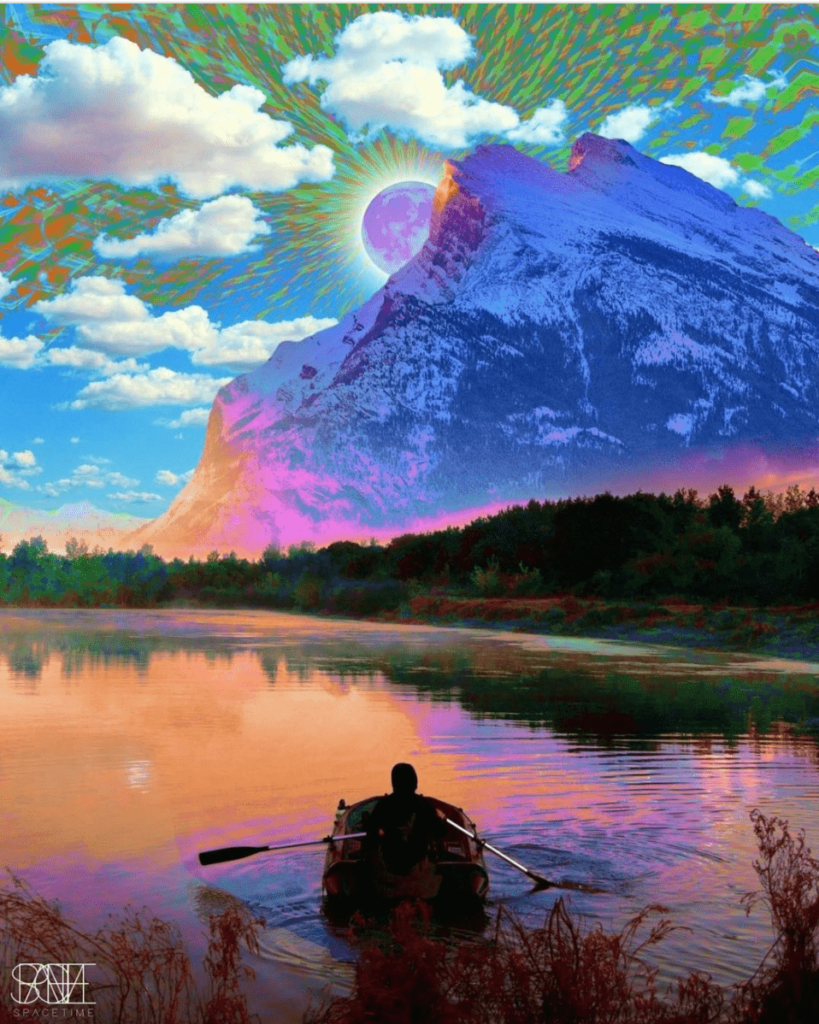 This delves more into the realm of psychedelics. It’s a sweet piece of nature imagery with an added layer of colour pop that represents the connection you might feel to the wider world when high outdoors. As Canadian stoners, we have a near-unique ability to buy weed and smoke wherever we like. Scenes like this as well as the vibe it gives off are within our reach and we’re very grateful.

Related: Where is Cannabis Legal?

The Universe is Abstract 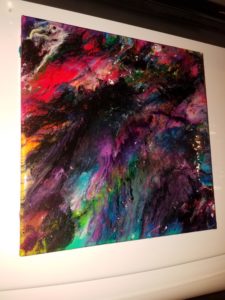 Some painters throw a bunch of colours on a canvas and call it art no matter what mess of nonsense it becomes. This is not one of those times. This artist has summoned up a nebula that wouldn’t look out of place in a sci fi adventure. A lot of stoners tell you to open your mind, others show you how.

Speaking of the Universe 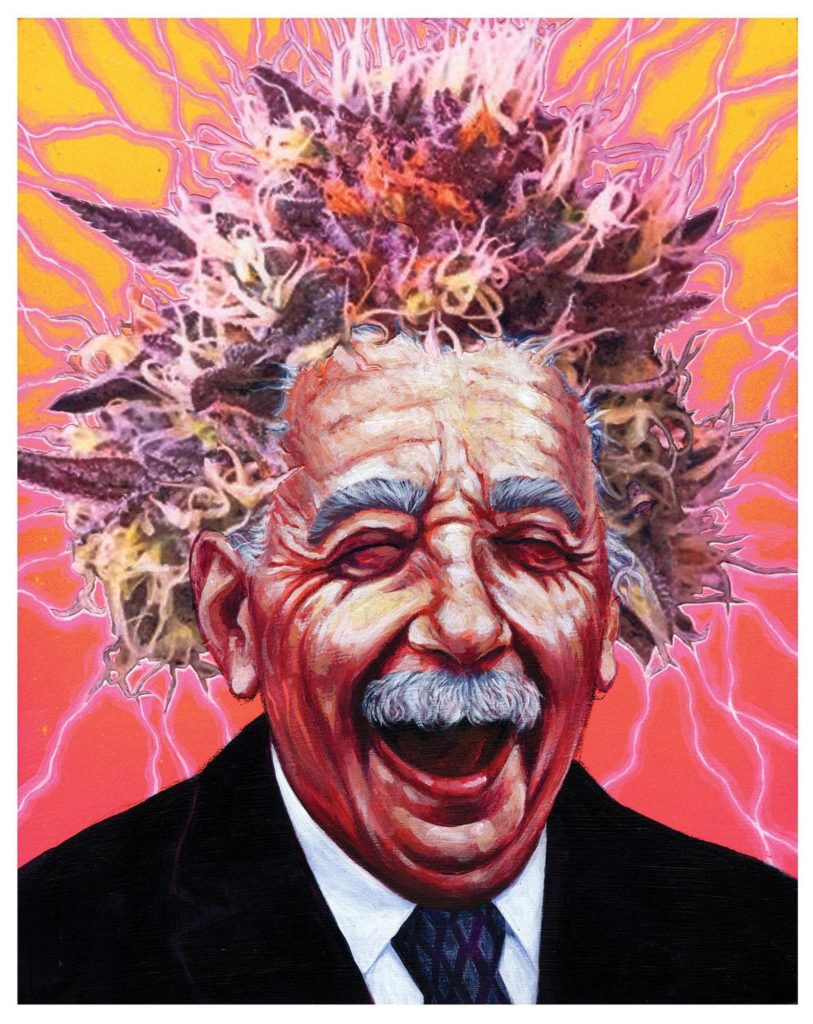 How could this piece not bring a smile to your face? Known for his brilliant mind-bending theories and insane hair, Einstein feels like a stoner icon. He never mentioned smoking weed in an interview, but he was against prohibition, felt that pipe smoking was essential in helping him keep a calm mind, and talked a lot about altered consciousness from a professional standpoint.

“No problem can be solved from the same level of consciousness that created it.”

Whether he was a green fiend or not, Einstein has certainly been immortalised in this crossover piece. The colour and detail is insane here and the look of pure elation just makes me happy. Whatever he’s smoking and/or growing, count me in. 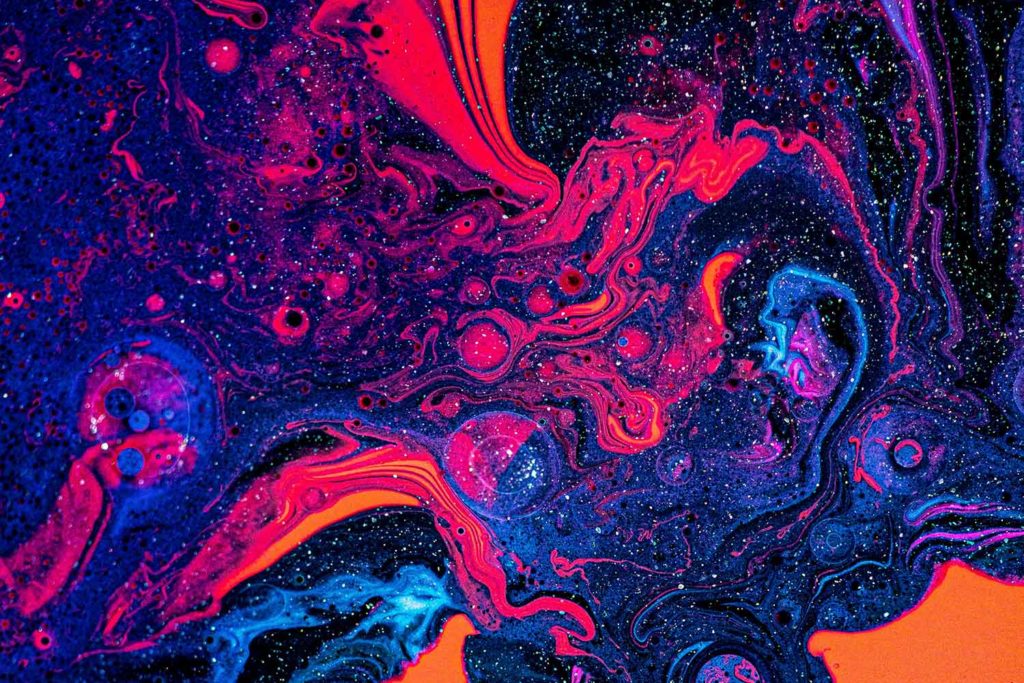 Another mind-broadening piece we came across on our worldwide web wanderings. It could be raindrops in an oily pool, it could be a galaxy. Either way, we’re into it.

Can He Roll With Claws? 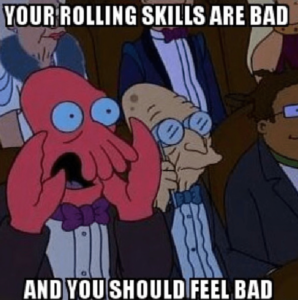 This one ticks a lot of boxes. No, this isn’t one of our legendary meme compilation blogs, but art is art. If you can hear an image, if it makes you laugh, if it’s relatable or summons up some other familiarity, it’s probably a meme. But it’s also art. And Zoidberg is always a win. 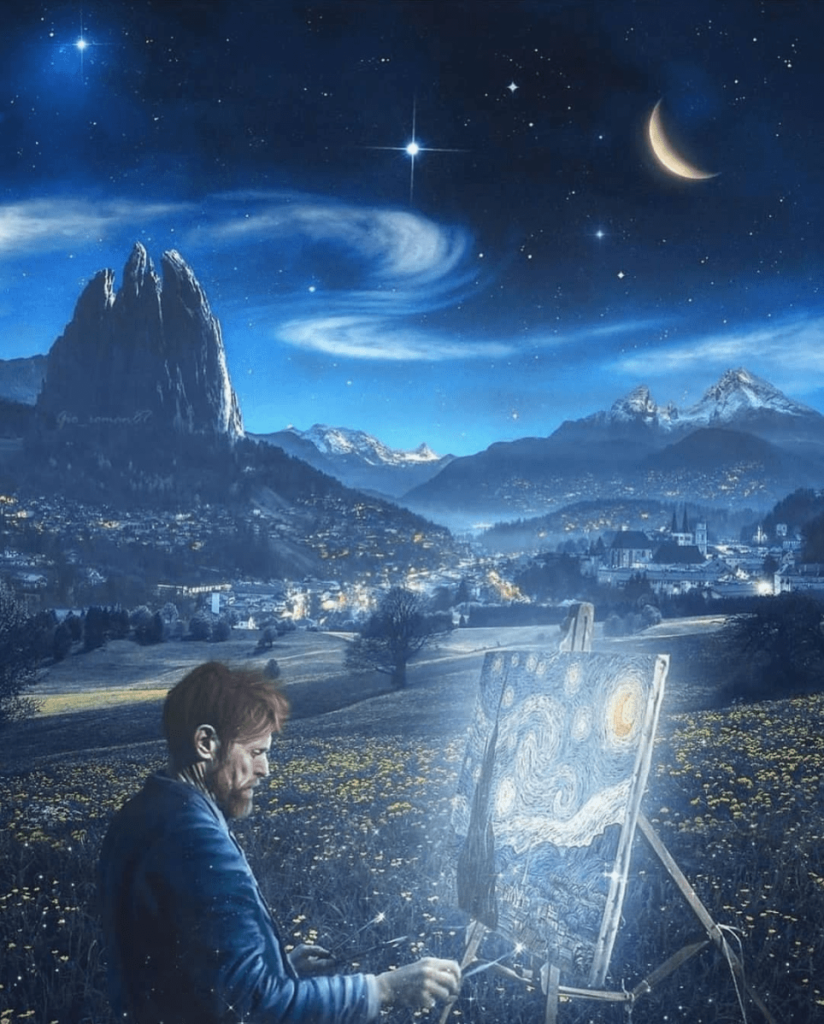 Holy Willem Dafoe, that’s a cool painting! In fact, a cool painting of a painter painting a cool painting. Van Gogh apparently painted the original indoors and he didn’t look exactly like the Green Goblin/that man shouting about lobster in The Lighthouse.

As an idea brought to life though, this is beautiful. It says a lot about a work of art too: what is actually there and what the artist does to turn it into something more than the sum of its parts. The creator of this piece took a backdrop, an actor’s image, and a famous piece of art and made something new and striking. Also, that glow coming off the canvas, as if it were emitting its own light, is a wonderful touch. Can you tell we love this one? 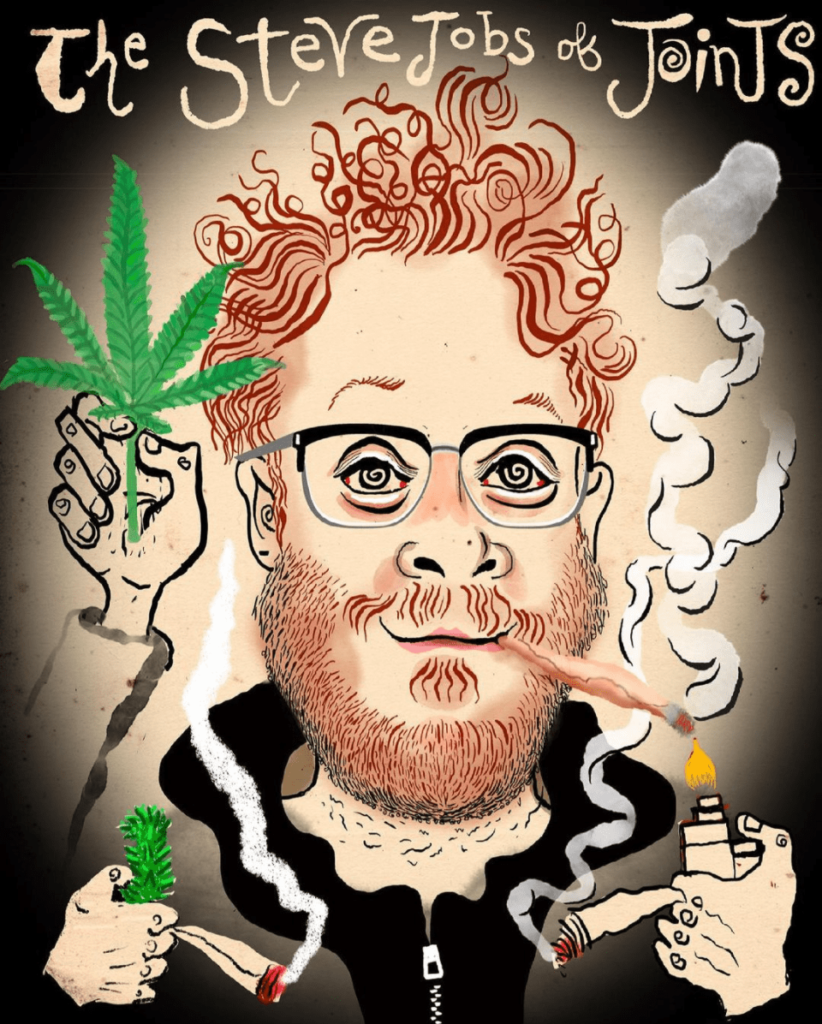 It wouldn’t be a Hot Grass blog without a reference to Snoop Dogg or Seth Rogen. We know other weed enthusiasts, we promise. But how cool is this? It’s officially licensed stoner art by illustrator Josh Gosfield for Air Mail Weekly. To paraphrase Harold and Kumar, Rogen has certainly become something of a Business Hippie considering his insane work ethic over the past 20 years. 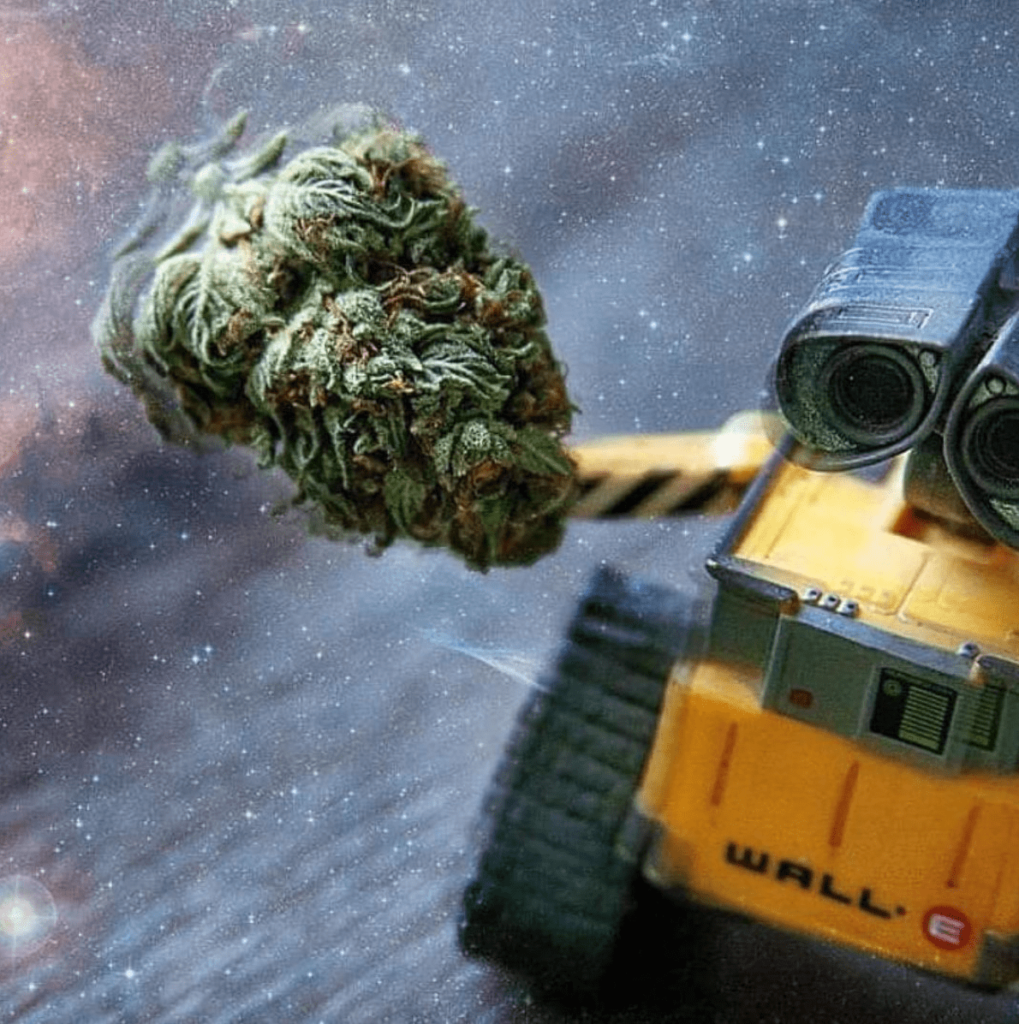 I wonder if WALL-E’s internal recycling compactor would work as a grinder. I bet it would. We don’t have a lot to say about this one. WALL-E’s great, that’s a delectable nug of cannabis he’s holding, and the two together make for a satisfyingly trippy image.