Magic mushrooms are similar to cannabis when it comes to different types or strains. Strains of magic mushrooms give the user a unique experience and can vary in potency. The best magic mushroom strains in Canada are Penis Envy, Blue Meanies, Golden Teachers, and Avery’s Albino.

Penis Envy magic mushrooms are one of the most popular strains, not just in Canada but worldwide. It might be because of their name which comes from their phallic appearance. Penis envy mushrooms have a dense, bulbous, and wrinkly stipe and a cap that doesn’t open very far. 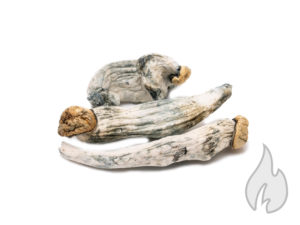 People’s experiences with penis envy can vary greatly depending on their mood or environment (learn about how setting intentions can impact a psychedelic experience). Some find themselves deep in meditation, while others feel as though they have an intense mystical experience. This strain is potent and definitely contains some magic.

The Blue Meanie Mushroom is a regularly sought-after Psilocybe Cubensis strain, and it’s very potent. Its name comes from its blue colour. It produces small fruits that bruise easily (turning a dark blue colour). With its dark colouration and intense potency, Blue Meanie is easy to identify. 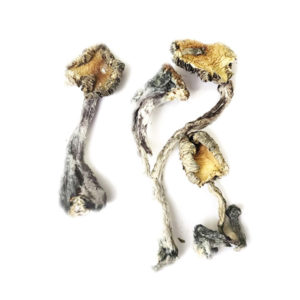 These guys pack quite a punch for their size. Expect a euphoric experience that will transcend time and space.

Golden Teachers have caps with a unique golden hue, distinguishable from other varieties when fruited—less so once they’ve been harvested and dried. They’re known for their unique psychedelic journey that people have reported as being more spiritual. The “teacher” in their name refers to the effects commonly experienced: users report a thought-provoking, philosophical trip, as well as the body high and the visuals associated with other cubensis strains. 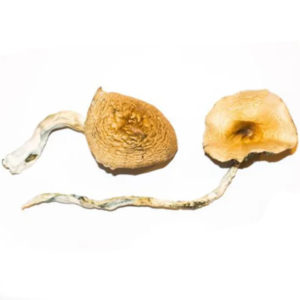 They provide a good entry point into psychedelic experiences with moderate concentrations of psilocybin. You can slip into altered states of consciousness without too much intensity. We still suggest starting low and going slow for new users.

Avery’s Albino magic mushrooms are a unique creation from a geneticist who was focused on experimenting with pigment allocation and mutations in Psilocybe Cubensis A+ mushroom strains. This resulted in a ghostly white colouration. This strain is widely loved but is rarer than other strains because they’re tough to grow due to their need for a more humid and warm environment. They’re a shorter breed with thick stems and a large cap. 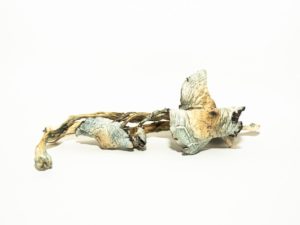 Of course, it’s not just about the name or the look, but the trip experience. Avery’s Albino offers a well-rounded shroom experience that affects users both mentally and visually. Reviewers report strong visual and euphoric effects, such as mood elevation and excitement, and strong visuals. They’re fast acting and hard hitting, so they are not ideal for first-timer. You’re likely to feel the effects in around 30 minutes.

Magic mushrooms can be a magical experience! There are many benefits and different ways to experience magic mushrooms, so it’s essential to consider what’s best for you, including the strain.

When trying a new strain for the first time, we always recommend starting low and going slow. Each strain won't impact you the same way and will have a different level of potency, so slowly build up how much you consume so you’re not caught off guard.

Want to microdose instead of a full psychedelic trip? Learn more about microdosing.

How to Grow Mushrooms at Home