Irritable bowel syndrome (IBS) is an inflammation disorder that affects a person’s large intestine. It’s a common disorder that impacts approximately 11% of the population globally. IBS is characterized by a mix of stomach pain and/or discomfort and trouble with bowel habits. These bowel habits are typically going more or less often than normal (diarrhea or constipation) and/or having a different kind of stool.

The two most common forms of Inflammatory Bowel Disease (IBD) are Crohn’s Disease and Ulcerative Colitis, both of which are characterized by chronic inflammation of the digestive tract, which leads to abdominal pain, severe diarrhea, fatigue, weight loss and malnutrition.

Symptoms of Crohn’s disease and Ulcerative Colitis are very similar; typically including, diarrhea, fever, fatigue, abdominal pain and cramping, blood in the stool, reduced appetite and weight loss, and in some cases more severe symptoms. The main differences are as follows;

In a few cases, approximately 10%, IBD exhibits features of both Crohn’s disease and ulcerative colitis - this is called indeterminate colitis.

There is no cure for either IBS or IBD, so treatment focuses on symptom management. Preliminary research supports the use of cannabis for the management of symptoms associated with gastrointestinal issues.

Research has begun to explore the cannabinoid receptors present in the gastrointestinal system, including in the colon, particularly their role in managing inflammation. They have also found that the endocannabinoid system is involved in regulating a number of regular functions in the gastrointestinal system. This includes the speed of digestion, motility in the bowel, and the emptying of the bowel, all of which can be impacted with IBS and IBD.

Research on Cannabis and IBS

The main cause of symptoms associated with IBS is believed to be a result of inflammation. Cannabis is a well-established aid for inflammation and research supports its contribution to a reduction in inflammation in the gastrointestinal system.

A 2004 study provided support for the use of cannabis for managing pain associated with IBS. In a 2012 study, IBS patients given cannabis to manage their symptoms reported an improvement in their overall quality of life including positive markers on overall health, ability to work, social ability, pain, and depression. Another 2011 study found similar results when patients were given CBD only.

Research on Cannabis and IBD

In a 2011 study, researchers found a reduction in subjective disease activity following treatment with cannabis. Cannabis reduced the need for other medications as well as surgery for participants, which is a significant improvement. 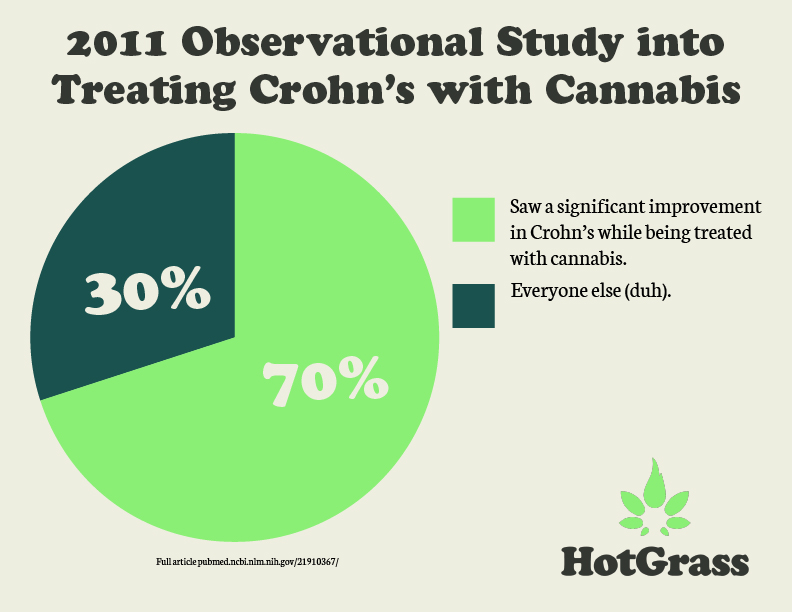 They found that activation of the cannabinoid receptors decreased hypersensitivity in the gastrointestinal system which is one of the possible causes of abdominal pain associated with IBD.

The same group of researchers completed the first controlled trial of cannabis on Crohn’s Disease. In this study, clinical remission was achieved by 45% of the participants and 25% were able to suspend corticosteroid therapy. Overall, 90% of participants demonstrated a positive clinical response which resulted in significant improvements in participants’ pain scores as well as overall quality of life.

How to Use Cannabis for Gastrointestinal Issues

There are numerous ways of consuming cannabis that can be helpful in the treatment of gastrointestinal issues. When it comes to the route of administration, it’s important to consider ongoing relief as well as acute management of pain. Many cannabis advocates also recommend administering cannabis as close to the problem as possible.

Taking these two factors into account, edibles and capsules may be a good choice for many people as they’re easy to dose and they’re absorbed through the stomach. These are great for ongoing relief as they take longer to take effect and the effects last longer than some other methods, while tinctures and vapes can help with acute pain management as they set in more quickly.

Topicals are another option for managing pain and inflammation as they can be applied to the lower abdomen. Another option for getting the dose of cannabis as close to the problem as possible is suppositories.

We recommend trying a few different methods to determine which is most effective for you.

Suppositories are medications inserted into the rectum or vagina. They’re used for a few reasons: (1) to deliver medication directly to the site of pain/discomfort (ex: constipation), (2) medication is absorbed rapidly through this method, (3) a person is unable to swallow medication, typically due to problems with vomiting, compromised gastrointestinal tracts, or inability to swallow.

Rectal suppositories are used for a number of reasons including but not limited to IBS, Crohn's Disease, and pain. One of the advantages of cannabis suppositories as a treatment method is that a person can tolerate higher levels of THC without a significant psychoactive experience.

Note: make sure to calculate the total dose of CBD and THC in the mixture and divide by the total number of suppositories for the most accurate dosing.

Cannabis has the potential to make the symptoms of gastrointestinal issues easier to manage and increase a person's overall quality of life. Consider trying a few different methods and see what works best for you.

Ready to add cannabis into your health routine? Check out our online dispensary for a wide range of products that can help to reduce your discomfort.