Cannabis for Parkinson’s Disease and Dyskinesia

Research suggests that cannabis has neuroprotective properties, which has led to much discussion regarding using cannabis for Parkinson's disease and other neurological disorders, like dementia. The research in this field is still in its beginning stages, but some studies have already shown promise for those with Parkinson's disease.

Parkinson's disease (PD) is a progressive neurological disorder that affects movement. It's commonly known for tremors, but people can also experience stiffness and slowing of movement. Symptoms typically come on gradually and may not even be noticeable at first.

Parkinson's disease is the second most common neurodegenerative disorder after Alzheimer's. About 6,600 Canadians are diagnosed with PD every year, and about 100,000 Canadians live with the disease. Between 7 and 10 million people around the world live with this disease.

Symptoms of Parkinson’s are managed with lifestyle changes, therapy, medication, and surgery in some cases. Treatment typically includes physical therapy, occupational therapy, and speech therapy, which can help one's ability to function and improve their overall outlook on life.

Cannabis is typically sought after for treating Parkinson's disease to manage the side effects of traditional medication.

The two most common medications for Parkinson's are levodopa and carbidopa. 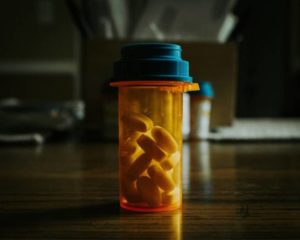 Levodopa helps replenish dopamine, and carbidopa is used in conjunction because it delays the breakdown of levodopa, increasing the availability of levodopa in the brain.

Side effects can be challenging, especially when used long term. The side effects of levodopa include:

One of the many reasons people choose cannabis as a treatment for Parkinson's disease is to help relieve the side effects of their medication.

There is research in progress on the use of cannabis to treat Parkinson's disease, and the results appear promising.

Research out of Brazil suggests CBD can improve the overall quality of life of those with Parkinson's disease. A 2017 study found that CBD can increase dopamine levels as it acts as an "inverse agonist" on CPR6 receptors. These receptors are found predominantly in the basal ganglia region of the brain, which affects the movement functions in our bodies. This means CBD potentially responds within the receptors to provide therapeutic effects against PD symptoms.

Another study is currently underway at the University of Colorado. However, regardless of clinical data to back it up, many people choose to use cannabis to treat their symptoms and manage the side effects of long-term medication use.

One of the main reasons people seek cannabis as a treatment for Parkinson's disease is to manage dyskinesia symptoms.

Dyskinesia is one of the most common long-term effects developed in some people with Parkinson's disease who use levodopa. It's described as an uncontrollable movement. It can occur in one body part, such as an arm or leg, or affect the entire body and look like fidgeting, writhing, wriggling, head bobbing, or body swaying.

Some people can manage the symptoms of dyskinesia without too much trouble. In contrast, others find it causes them a significant amount of pain. For those experiencing painful or otherwise difficult to manage symptoms, engaging in physical activities that typically affect their social lives can be challenging.

Cannabis could be an alternative treatment that has the potential to allow people to be on a lower dose of medication and still manage their symptoms. Even if cannabis does not directly affect the person’s tremors, it helps manage their pain and helps to improve their overall quality of life.

THC or CBD for Parkinson's?

Because THC and CBD affect the body and brain differently, it's recommended they be used in conjunction for the entourage effect. Juan Sanchez-Ramos M.D., the Medical Director for the Parkinson Research Foundation, told Project CBD he encourages his patients to use both. Often, this means beginning with a 1:1 THC/CBD ratio product.

The most common consumption methods are CBD tinctures or edibles. Check out the CBD section of our online dispensary to find your favourite products.

CBD as Prevention for Parkinson's

Researchers have found some preliminary evidence to suggest that CBD may be able to help prevent Parkinson's disease. However, this is in animal models. More research is necessary to understand how CBD may protect against neurodegeneration associated with Parkinson's.

Currently, human studies have not shown the same results. However, one thing to keep in mind is that by the time a person begins showing signs of Parkinson's disease, about 60 percent of the dopamine-receptive neurons have already been destroyed. So, it can be challenging to understand how preventative measures would work.

There is promising evidence that cannabis may help prevent Parkinson's disease and help manage symptoms, particularly the side effects of treatment. More research is necessary to fully understand how cannabis supports neuroprotection and neurogenesis.

If you are considering using cannabis for Parkinson's disease or to manage symptoms associated with medication side effects, speak to your doctor.

Further reading on cannabis and health:

Cannabis for Migraines and Headaches

Cannabis for Cancer and Chemotherapy Symptoms