If you’ve got trouble sleeping, for example, this can be an extremely useful strain to help curb that insomnia as well as having some decent effects on things like muscle pains and aches. Personally, I find it highly enjoyable a day or two after the gym when my muscles (or lack thereof) are giving me grief! 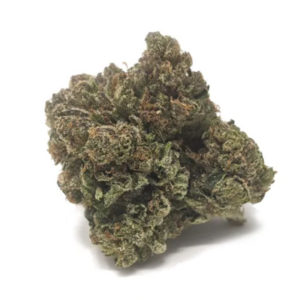 This strain in particular produces a fairly heavy body high, similar to most powerful indica strains, not surprising given its parentage. I’d definitely recommend getting any chores, work, or life admin done before indulging because after a few tokes of this, the mind may still be willing but the body will most definitely be thinking “...nah, man”.

Great for lazy weekend days, rich food and slow-paced movies, it is the epitome of a ‘chill’ strain, keeping your mind reasonably active while your body attaches itself to whatever sofa, beanbag, or bed you’ve got available for the foreseeable future.

Like similar indica strains (cheese, AK47 etc), Death Bubba has a pungent and skunky aroma, so if you don’t want your room or house to be whiffing for days, it’s probably best to keep it wrapped up nice and airtight. The taste, similarly, is earthy and quite rich, particularly when smoked. Vaporising can give it a slightly more aromatic smell, but I wouldn’t classify it as a particularly ‘tasty’ strain - not that that’s any kind of deal breaker!

It is, however, very pretty, often streaked with purple shades and covered in gorgeous crystalline trichomes, which also leads it to be a little sticky to the touch, so don’t be surprised if your hands whiff for a while after rolling or packing to smoke up.

As far as ‘side effects’ go, you can expect the standard dry mouth and dry eyes, but not to any massive degree. You’re primarily looking at a nice, relaxing and cheerful head high (great for sleeping problems) and a strong body high that’ll further put you at ease. Definitely what I would call a ‘weekend and evening’ smoke, best burnt on days where strenuous physical or mental activity isn’t necessarily in the cards.

And as always—please smoke responsibly!

Why BC Bud is Better