One of the problems with being a stoner is that everything is so funny in the moment, but when you tell someone who wasn't there, it doesn’t sound that funny. We've put together a list of stoner situations we can all relate to. Here are a bunch of dumb things that stoners do while high!

Does this sound oddly specific? I still think about those dips; how dry the chicken strips were; the look of disappointment we passed around the room when it dawned on us what had happened. Always have dips in the house to avoid a tragedy like this affecting you or a loved one.

You enter the kitchen for a little snack, then you have an idea. You see bacon and you think that would be a nice touch. Next thing you know it’s bacon, eggs, sausage, breakfast muffins, pizza, steak… The munch just grabs you at the exact moment of inspiration and an insanely elaborate meal is born. And of course, if you have some budder to hand, you feel the need to turn the meal into a giant edible.

Now we get to the man who inspired this whole post. Ethereality420 is an inspiration to us all. 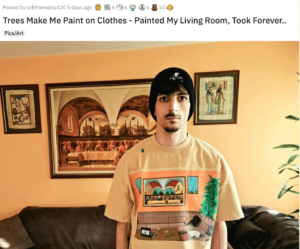 The fact this artist says that smoking makes him paint on clothes is all kinds of hilarious. The need to replicate his living room is such a perfect mixture of stupid and smart at the same time. We love it. I’ve only painted high once, but it was a treat. We recommend a creative sativa strain that won’t kill your motivation by making you lock into the couch.

Have you ever sat listening to a song you’ve heard a thousand times, in a nice mellow state, when suddenly there seems to be an extra instrument you haven’t heard before? The drummer’s doing one of those tiny, endless solos on the cymbal and now it’s overriding the whole song just for you.

Watching movies as a stoner is different too. Watching the first Avengers for maybe the fifth time, but the first time after a heavy blunt, the costumes looked cheap, the lighting looked like TV and I was incredibly aware that I was watching a group of grown men and women swing hammers and throw shields for a living.

Eat Beyond the Point of Reason

It’s a strange phenomenon to feel your stomach be completely full but your hunger hasn’t subsided at all. One more fry. One more chip. One more slice. Why you lyin’?

No, not like that. We're talking vines, conspiracies and reality shows. Stoners like to get down to the granular level with these things, really go as far in as they can, down to the source code. Down into the deepest soul or find the absolute peak. For example, the more racist, stupid, ignorant, and belligerent they get, that is peak Wife Swap. 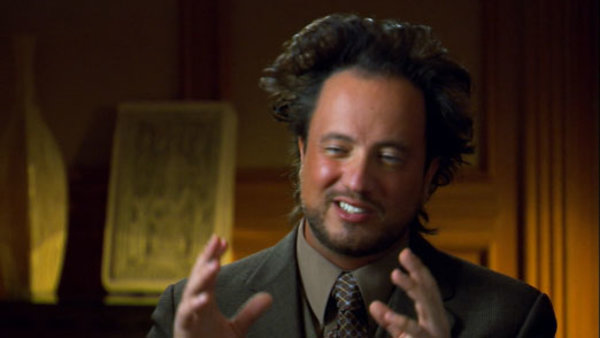 This basically goes for any food aisle, standing menu, or concession counter. You’re so excited for the meal to come but it feels like the most important decision of your life. Also your head’s all drifty and you can't help adding more and more to the meal.

Walk Into Rooms and Forget Why

Some highs are just a series of started activities that are abandoned halfway through. You ever, sort of, come to and you’re brushing your teeth in the kitchen? You started brushing but when thought you should finish snacking first, forgetting to leave the toothbrush behind. 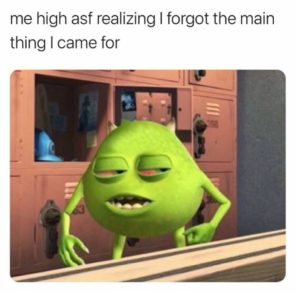 This one’s broad. Some fellow stoners and I once stuck the end of a joint into a lemon and tried to inhale through it, to limited, citrusy success. Other crimes may include smoking from the wrong end, putting a lit blunt behind your ear, relighting a doob that’s already lit or asking who’s got the joint while you’re holding it.

One friend of this writer smoked so much on Christmas Eve one year that he looked at himself in the mirror and swears he had an out-of-body experience. He was watching himself live and seeing himself through the eyes of others. Some heavy strains or unexpectedly potent edibles will just take you there. There’s a reason the most tired cliché about stoners is a hippie telling you to open your mind. 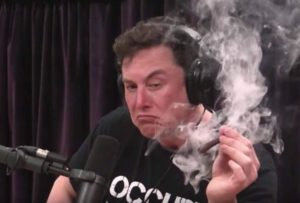 You tell yourself you need a break, that the amount of weed it takes to hit you these days is just not sustainable. You’re going to watch a movie in real time, sober as a judge and get an early night. But then that little green devil on your shoulder suggests that if you don’t get insanely baked then surely your tolerance will still drop. Just have a little one. A few puffs. Maybe one more J. Then you’re through the gateway, several blunts deep and finding Meet the Fockers funny again. Maybe tomorrow night…

Realise You’re Watching Something You Didn't Put On

Whether it’s YouTube, Netflix, or your platform of choice, it’s easy to let what’s playing get away from you when you’re baked. Back in the days of DVDs, it wasn’t hard to find yourself watching the home menu over and over again, a mixture of confusion and captivation playing across your mind. After sinking deeply into a relaxed couch lock, you might turn to your friend after an hour or three and ask the age-old question: “What are we watching?”

Put Stuff in the Fridge

What is it about the fridge? It sucks in everything around it when you’re high, including you and other random objects. Not only are you constantly retreating to the fridge to find snacks, but you also end up leaving stuff behind. You’re switching your attention between making a sandwich and texting and you end up putting your phone on the shelf instead of the ham. My roommate once left a full packet of cigarettes in the fridge overnight for safekeeping.