Elon Musk's bid to purchase Twitter for $44 billion has been accepted, so how is this going to change the landscape for cannabis consumers and businesses on social media?

Social media platforms have a complicated relationship with cannabis. It would likely be challenging to find a cannabis company that hasn't been banned from a social media platform at least once if you asked around. Additionally, posts are blocked and accounts experience shadowbans.

The challenging thing with cannabis and social media is how marijuana 'rules' are enforced. To many users, the rules are unclear because posts that appear to be harmless get blocked while other potentially riskier content gains traction without a problem. 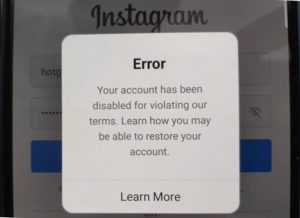 A further issue is the unequal enforcement of cannabis-related policies that are both vague and outdated. The current policy states it's prohibited for users regardless of whether or not their licensed or legal companies attempt to 'purchase, sell or trade' cannabis. However, large corporations appear to be allowed to promote products and locations. We’ve even had targeted ads for shrooms on Facebook, so what gives? At the same time, independent operators are suspended, shadowbanned, and even get accounts deleted without any kind of appeal process. Months of hard work and important relationships can just be erased without any discussion.

For their part, Twitter is generally more lenient than Facebook or Instagram when it comes to cannabis content. Still, despite cannabis being legal in certain places, you won’t be allowed to advertise it freely, even if you limit your reach to legalized jurisdictions. The main reason for this is the tech giants playing it safe so they don’t wind up in court. Cannabis may be legal in certain US states but not at the federal level, so it’s not surprising the current directors err on the side of caution. Elon Musk generally has a more freewheeling attitude.

Of course, we don't know what changes Musk will make to Twitter and how this will change the social media landscape for cannabis businesses. However, Twitter does appear to be the best fit for Musk based on his personal ideals.

In 2018, Musk smoked a joint on the Joe Rogan Experience, which not only became a meme but was discussed on MSNBC. Recently, Musk tweeted, 'Twitter's next board meeting is going to be lit' with a picture of himself from the podcast (April 7th, 2022). 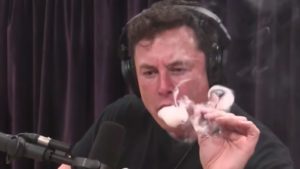 Musk’s bid of $54.20 per share contains the digits 420 and the financing documents were even submitted on April 20th. Coincidence? Yeah, probably, although he has incorporated the number into his financial grandstanding before.

In 2020, Musk added his thought to the discussion surrounding freeing America's cannabis prisoners.

He wrote, "Selling weed literally went from major felony to essential business (open during pandemic) in much of America & yet many are still in prison. Doesn't make sense, isn't right." We can’t agree more.

While Musk isn't the guy who's bankrolling state legalization campaigns, he does boldly support the cannabis movement in the US.

According to the LA Times, Musk stated his interest in Twitter isn't motivated by its finances but by its role as a public forum. In his SEC filing, he wrote, "I invested in Twitter as I believe in its potential to be the platform for free speech around the globe, and I believe free speech is a societal imperative for a functioning democracy." Musk supports free speech and has indicated he will tilt Twitter's content moderation in a permissive direction.

Upon the acceptance of his bid on April 25th, 2022, Musk tweeted a photo of a quote: 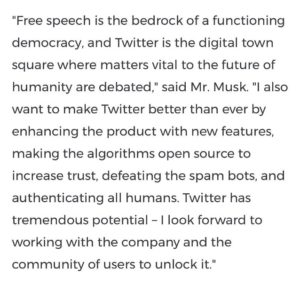 While we can see the positive changes that could arise from Musk taking the helm at Twitter, will he take it too far? Without moderation, Twitter could become a lawless free-for-all. Misinformation has been rife in all corners of the internet in recent years, and its validity often seems based on opinion. Musk has described himself as a “free speech absolutist.”

Additionally, Musk noted: "I also want to make Twitter better than ever by enhancing the product with new features, making the algorithms open source to increase trust, defeating the spambots, and authenticating all humans." One of these features may be an edit button.

Can Musk's Influence Over Twitter Support Change with Other Platforms?

Musk cannot directly influence other social media giants like Meta. However, suppose Twitter can make positive changes that support its current user base and make it a more enticing platform to new users. In that case, other platforms may be forced to reconsider their current strategy and policies related to cannabis.

It could be said that Musk's success with Tesla has helped influence other car companies to enter the electric vehicle market in order to compete in a shifting industry. Maybe the same could happen with social media—we will just have to wait and see.

Anyone who works in the cannabis industry has likely had some frustration at the restrictions on sharing cannabis content. You can post pictures of a bud, talk about the best strains in an academic sense, even be listed as a dispensary, but the second you post any kind of offer the tech police are on you like white on rice.

Sometimes you get a warning, sometimes your Instagram hits 1000 hard-won followers and the next day it's gone, doesn't leave a note, and steals your car. The cannabis industry is competitive enough without dispensaries being hamstrung by ironclad restrictions. There are ways around it: using established accounts with a clean record, selecting clever keywords, linking to other pages before making an offer. It's just a shame that you can walk down the street smoking a blunt in Canada but you can't offer one to your neighbour at a fair price. While weed dealing is legal out in the world, online sellers are forced to act like their business is something criminal. Perhaps Musk buying Twitter will shake things up and change is on the horizon.