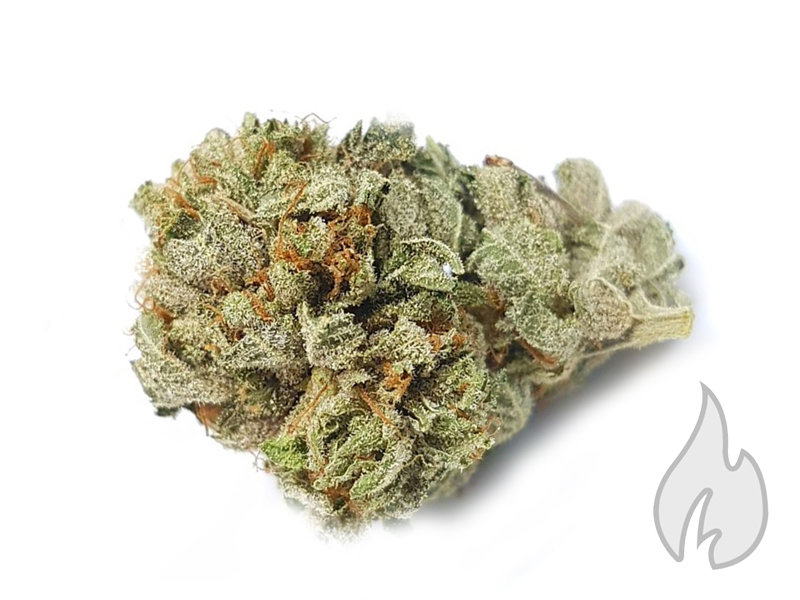 OG Kush cannabis flower is an infamous strain with a name that has recognition even outside of the cannabis community. Its exact origins remain a mystery, one thing that’s not up for debate is OG Kush’s potency — its THC composition has been consistently measured at between 20% and 25%.

OG Kush has medium to large nugget-like buds that have a dense, indica-like structure. The leaves are yellowish green, although certain phenotypes can show traces of purple; the latter color is the result of anthocyanin pigments being activated by cold weather. Vibrant orange pistils, meant to catch pollen from fertilizing male plants, stand out against these colorful flowers.

The buds are covered in trichomes that lend them a silvery-white appearance and make them very sticky to the touch — when prepping buds for a joint or a pipe, users may want to use a grinder. When properly cured, the buds have a earthy, musty scent that is accented by some citrusy brightness: the overall impression is of a hoppy craft beer. Burning or breaking open the buds offers more of a pine-like odor. Smoke from OG Kush is commonly harsh and cough-inducing; it may sting the sinuses and cause eyes to water. The smoke tastes hashy and spicy like a classic indica on the inhale and exhale. OG Kush’s pungent funk may linger for a while after a joint has been extinguished — those looking to remain discreet about their smoking should take the proper precautions.

The high from OG Kush is more head-focused than physical. It starts with a sudden headrush that may lead users to feel more focused on their surroundings; sounds and colors may seem intensified. This alteration of the senses may soon give way to a general uplift in mood that progresses towards euphoria. The increase in focus is not as cerebral as with more pure sativas — smokers will not suffer from a disorienting sense of rapid thought association or “mindrace.”  It’s a versatile smoke that lends itself to the user’s mood and mindset The combination of mental stimulation and improvement in mood makes this a uniquely social strain, good for parties and lively conversations. It’s also a great way to enhance activities that involve the body and mind, like video games, exercise, and even sex. OG Kush has medical application as a means to temporarily relieve anxiety and depression by helping users live in the moment. Its sense of focus can also be helpful for those suffering from attention deficit disorders. Some have reported relief from headaches and migraines with this strain as well. As with many sativa varieties, OG Kush has the potential to make users feel paranoid with higher doses.

This AAAA example is above our $99 oz strain pricing on sale for a ridiculously low $129 oz, down from $175