Seth Rogen On Weed Advocacy, Racism, and the Dangers of Alcohol

Seth Rogen is a hero to a lot of stoners. He makes great movies and is a constant, proud weed advocate. What fewer people know is just how knowledgeable and passionate Rogen is about the intricacies of the cannabis industry, as well as its battles with alcohol and racism before and after legalization.

Rogen has been vocal on these subjects for years, growing up in Vancouver and likely frequenting a lot of the same pot stores as us even before legalization. He has also been critical since legalization of the inherent racism that’s still prevalent in the cannabis space. We’ve taken a deep dive on Seth’s eye-opening insights into how weed has been used as a political tool and how the work, even here in Canada, is not done after legalization.

How Weed Should Be Normalized

Everyone knows Seth Rogen is a pot head. He’s made some of the best stoner movies of all time. While this might seem like an attitude born from not caring what anyone thinks, it seems to be quite the opposite. Rogen wants people to know he’s a stoner because he’s so grounded, successful, and normal. In his movies he’s usually the everyman. He represents us. Off camera, he’s hard working and consistently high.

From just a bit of research, it’s clear Rogen will talk to Stephen Colbert, Complex Canada, Vice, Rolling Stone, CTV – basically anyone who will listen – about cannabis and cannabis advocacy. He puts himself out there as an example of what someone who’s consistently high can achieve and dispel the archaic myths about marijuana.

“Weed has been an integral part of our day-to-day lives for 20 years,” said Rogen in an interview with Complex Canada, regarding himself and creative partner, Evan Goldberg. “Being a successful, functional, emotionally available member of society and being someone who smokes weed all day, every day [are not] mutually exclusive.”

Many in the cannabis community champion weed while pointing out the dangers of alcohol. Few take this stance as often and openly as Seth Rogen. It is a consistent point of hypocrisy across the world that a plant that can’t physically kill you is illegal while an excessively damaging substance like alcohol is legal and encouraged. This is clearly nothing do with health and everything to do with money. When the government can figure out a way to make money off of something, suddenly legalization becomes palatable to politicians. Alcohol is such a normal part of our society and is taxed heavily, despite the damage it does. Yet it’s still cannabis that fights the uphill battle against the stigma of causing moral decay, mental illness, and criminal activity. 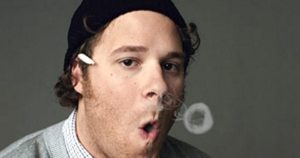 Seth Rogen and his creative other half, Evan Goldberg, started House Plant, a Canadian cannabis company and online dispensary. This was something of a lifelong dream and passion project of theirs and every detail has been thought out. Details such as a focus on health: producing cannabis sparkling water that’s sugar free. But their moral stance doesn’t end there.

“…there would be no way that we would even consider entering this space without really actively trying to rectify the issues that go along with being in the space... Weed should have never been illegal in the first place. If you go back, a large part of the reason it is illegal is literally racist and it’s very important to us to acknowledge that and not hide from that and try to help fix that in any way we can. – Seth Rogen, speaking to Vice.

Rogen has spoken more than once about the racist origins of weed prohibition. The word “disenfranchised” is thrown around a lot in conversations about race. In the most basic terms, it means being stripped of your right to vote. This historically happened frequently after being incarcerated for a crime. This still happens in 11 states across America and many people of certain targeted groups are still being arrested for trifles like weed possession, even in the traditionally lenient Canada. On a generational scale, these people would then be unable to vote, have a voice and a say in how the world works, and be kept down for decades to come.

Rogen and Goldberg grew up smoking cannabis in Vancouver, a community which has been lenient and pro-cannabis since way before legalization, with dispensaries being commonplace across Canada. Despite steps forward, they still call out some of the troubling issues post-legalization. For one, the language of the legislation and talk around it implies that the Canadian government is giving in to a vice a lot of people have rather than saying: “no, it was wrong to criminalize cannabis, a generally harmless plant, in the first place.”

Another issue is that people who sold cannabis in Canadian dispensaries on the grey market – between legalization for medicinal use and full legalization – are not allowed to now sell it legally.

“In fact, some provinces have gone so far as to disqualify you if you were involved in the grey market from now being in the industry, which is completely ridiculous and counterproductive. It’s rewarding people who have nothing to do with cannabis and have not dedicated their lives to trying to bring it to people in a safe, responsible way.” – Seth Rogen

In short, people who fought for this industry and helped build it are now excluded from reaping the benefits. While people who were traditionally against cannabis use – including cops and conservatives – are now buying into the industry to make money.

"We're proud that Canada legalized it, but it's been done in a way where there's a financial barrier to entry and everything's very difficult for people who aren't giant corporations," added Goldberg. "So, there's a lot of work in Canada that still needs to be done. Always more in America, but a lot in Canada."

So, what’s the conclusion here? That despite Canada and (more slowly) America and the rest of the world waking up to the benefits and innocuous nature of weed, there’s still a lot of work to be done. If anything, we hope we’ve opened your eyes to a few things in our own, admittedly rudimentary, way. We also just wanted to show that despite his affable demeanour, Seth Rogen has a lot more going on under those curls than daydreams about middle-aged virgins and house parties at the end of the world. Follow the links for a more all-encompassing look at these issues.

Let us know if you like this kind of content as it’s a little different from our usual posts. If you’re looking for an online dispensary in Canada, look no further. We’ve got whatever you need. Take a look through our virtual pot store and hit us up if you have questions or feedback. Smoke responsibly.